Why A Good Scalp MicroPigmentation (SMP) Should Never Get Spotted

When considering whether or not to go ahead with a Scalp MicroPigmentation (SMP) the major stumbling block is almost always the same… “What will people think?”. Get the right treatment at the right clinic and you will have nothing to worry about, it will be undetectable. But your confidence should be bolstered with a better understanding of how the brain processes vision, we take a closer look (no pun intended). People considering SMP will do so for a long time. There is the occasional gung-ho hero, who having discovered the treatment will just want to get it done, the same day if possible. Ideally they would squeeze the 3 step process into a single afternoon – so the job of the practitioner is to talk them down, explain how it all works, and see them safely to their perfect finish.

Those people fall into two groups: Family and friends for most will be critical, many will be able to talk it through before they go for treatment but many more will hope to get away without ever telling anyone, even their nearest and dearest… how realistic is that as an aspiration? For many years now the BBC have commissioned a series of lectures from the Royal Institute for transmission over the Christmas holiday period. One of the country’s leading University lecturers is invited to speak to a group of children on some bleeding edge scientific subject. Back in 2011 this saw Professor Bruce Hood from Bristol’s Cognitive Development Centre give an outstanding lecture providing insights into how our brain works and asking the question “Who is in charge?” It had a great deal of relevance for both hair loss sufferers and SMP wearers.

How We Really See 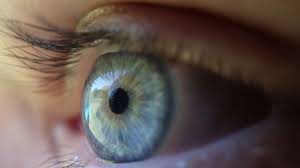 The first thing you need to understand is that your eye and brain work in tandem to deliver the experience of full field of vision, but it is nothing like a camera… however close to that experience it might feel. In fact, your eye is only taking in information from a very narrow field, about the size of your thumb when held a foot in front of your face. Your gaze will flicker around to fill in details from the periphery of your vision but it is only in that narrow field that you will notice anything significant… and even then tricks will be played on you. Back in 2011, Professor Hood gave the children a remarkable demonstration of how our brains really work. He showed them the picture above, a pretty standard San Francisco street scene. As he ran the video the image would blink, for about the same amount of time it takes your eyelids to snap shut and open again, before the image returned. The insertion of that almost imperceptible gap in the supply of the image was enough to fool everyone looking into thinking that the picture never changed. In fact, the tree was replaced by a completely different tree, the silver estate car was changed into a black saloon, the street furniture disappeared or was changed into something else. So major changes to what is a small picture with no dynamic elements went completely unnoticed if separated by a blink.

The experiment evidenced the fact that it is your brain and how it processes information it receives that defines what you think of as your reality.

What Does It Mean For My SMP? Imagine you are meeting someone for the first time. You will go through your locally appropriate greeting ritual, a handshake/nose rubbing/ whatever.., but all the while your eyes will be scanning them to gather lots of non verbal information they are sharing. Now unless there is anything unusual to draw your attention to it, food on the front of their shirt for example, you will revert to engaging them by looking mainly into their eyes. This does not mean your eyes will not flicker around as your brain seeks to fill in the blurred edges, but unless there is something to attract them the person you are talking to will notice nothing out of the ordinary. If your eyes keep flicking to the food stain then eventually they will become conscious of it… maybe tracking your gaze to discover the food for themselves – cue slightly awkward moment followed by an explanation or several more minutes of discomfort as it becomes the elephant in the room.

By the same token, your SMP will only be noticed if it registers with the other persons brain as “wrong” in some way. Given that there are testaments from clients whose SMP has stood up to close examination by dermatologists without being noticed, it is fair to say something has to be quite badly wrong to be noticed. Once their brain has ticked off your SMP as OK the constant flicker of the other persons eyes to the top of your head will become a thing of the past… unless they are glances of admiration, or curiosity as to why such a hirsute fella would choose to buzz-cut.

In short, we believe that fear of other people’s reaction is given far too much consideration by most would-be clients.  Believe the science, believe the testimony of the happy people on the forums who have had their lives changed in the most profound and positive way. Spend your energy instead on identifying the right clinic to perform your treatment – SMP Debate are always here to help you through that increasingly difficult process – We know that there are plenty of sub standard practitioners out there who have the presence and wit to separate people from their money without having a clue how to achieve a perfect SMP.

If we can help you find a reputable clinic, or sanity check what you have been told or your proposed treatment routine, we would be delighted to hear from you and look to support you through the process. Just click here to get in touch.