Over the years there have been various press and TV news items created around Scalp Micropigmentation (SMP). The majority have centred around a particular clinic operating in a City where they have come to the attention of one of the local news outlets. In the UK, GQ magazine and a couple of other high profile publications have also picked up the story of SMP. But the recent appearance in Vanity Fair undoubtedly represents a step up in the quality and breadth of that coverage.

SMP featured as part of an article looking at hair loss and treatments being used in Hollywood and asked the question which Hollywood star possessed the most popular requested hairline for SMP clients.

It will come as no surprise to many that the winners were Vin Diesel and Jamie Foxx, both of whom sport a sharp and defined look. This is unquestionably the style of choice for many of the vast majority of  younger clients, though not all will arrive for their treatment with a photograph of their personal favourite hairline… and even when they do it is as likely to be a random face from a newspaper or magazine advert. That said, Vanity Fair have probably nailed the two Hollywood stars that some will ask to be replicated on their own scalp. 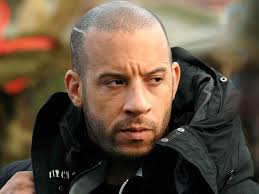 In the hands of the right practitioner this style is absolutely achievable, and convincing enough to pass close up inspection. Right down to the addition of a Vin Diesel scar if so desired. It is achieved by using a micro needles of varying sizes to insert pigments immediately beneath the outer layer of skin, the epidermis, into the collagen network. This is much shallower, by comparison, than a tattooist needle will deposit their ink. In most cases two or three different shades of pigment will be used, along with the differing needle sizes the overall effect is to perfectly replicate the way buzz cut hair appears on your scalp.

Beyond a defined hairline there are a surprising number of choices to make when it comes to choosing your own style. The precise position of the hairline, the density and shade of the treatment as well as the type of hairline – whether you go for that freshly barbered look favoured by Hollywood or a more broken natural look popular with older clients. You can expect a detailed conversation, along with bespoke recommendations, at a consultation with your local provider.

As always, the rule of Caveat Emptor (Buyer Beware!) applies. The market becomes ever more crowded with new providers so performing your due diligence is vital if you are not to end up in the hands of an unscrupulous practitioner.

Here at SMP Debate we are always happy to offer personal advice to anyone getting in touch, including putting you in touch with a provider of repute.