Scalp MicroPigmentation (SMP) has hidden in plain sight for years without puncturing the wider public consciousness. That might be all about to change with rumours of the latest industry client to “come out”. 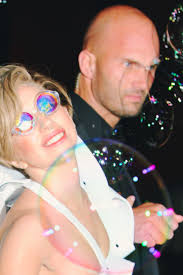 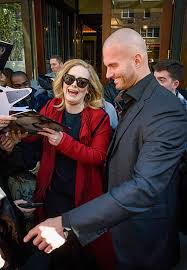 We have spoken in the past about how SMP does it’s thing… plenty of anecdotal evidence from clients on forums suggests that even a less than perfect treatment can pass unnoticed – even from nearest and dearest. It has something to do with how the brain processes information received from the eye – So much data arrives that it cannot all be continuously processed, the brain therefore concentrates on the essentials and treats the rest as background… so a captured and saved image is used for that background. It means that as long as the SMP survives a cursory glance it will be background. The science behind that is proven but we think there must be more to it…

Adele’s bodyguard hit the headlines for no other reason than his striking looks. This guy has been bodyguarding celebs for years but it was only when he got his SMP that he suddenly became newsworthy in his own right. As can be seen from the pictures above, left with Lady Gaga pre SMP and right, with Adele, having had the treatment. Remarkable really that he was known to the papperazi and their picture editors but nobody spotted the difference, these are professionals after all whose entire experience is all about analysing what they are looking at.

Out Of The Closet

It does seem as though the days of flying under the radar of wider public awareness might be about to change, all thanks to the wonders of the web and the new generation of broadcasters with their own viral following.

Yousef Erakat, better known to his 8 million plus youtube subscribers, is an American of Palestinian descent. He is an award winning internet broadcaster with a number of successful video logs (VLogs) but best known under his stage name Fousey. Rumour has it this is the work of an SMP clinic, we can’t be sure. If so then he should congratulated for deciding to do something about his hair loss in the first place, and separately again for the smart move to go for SMP, a perfect fit for his uber trend setting lifetsyle – If the SMP is good nobody will say a thing… and his is plenty good enough on this evidence. We guess the truth is known only by Fousey and his practitioner, if there is one.

If you are ready to do something about your own hair loss and think SMP might be right for you, it is vital to find a reputable clinic to perform your treatment. If you need help with that process we are always happy to hear from you. To get in touch please click here.